This gentleman's spirit team have consistently demonstrated visual phenomena similar in appearance to a plasma ball.  This initially appeared around, or as part of, his head and torso and more currently appears further extended.

Note: The electrode at the centre of a gas-filled plasma ball emits a high-frequency high-voltage electric current.  The gases used within the sphere are usually either neon, argon, xenon or krypton...all of which may be found in minute quantities within the earths atmosphere. Are spirit scientists able to manipulate such natural resources?

In February of this year, after sitting within clear lighting conditions (we had been sitting in a mixed blend of red and dimmed pink/white at the time) it was noticed that the mediums face felt hot to the touch and appeared red, as if slapped.
The following week this same condition was apparent and as a result we have subsequently decided to work only in dimmed red light.  This decision has been made with consideration that ectoplasm might be being utilised.  Ectoplasm is a physical substance that may cause harm (heat burns) to the medium if over-exposed to the light.
It seems a realistic consideration that the spirit team might be developing their own light form to illuminate substance-based structures...but this is currently simply a potential path...we cannot know or assume anything!

An Experiment:
Andy's board meeting

Note: Due to the changing demands of life in this physical world this mediums dedicated sittings have become suspended for the time being.  He is continuing to sit in support of others and is a valuable part of the Lodge circle.

Return to the Lodge/

In June 2018 a gentleman contacted me and following an informal meetup was invited to come along as a guest to the Lodge.  As time passed he demonstrated dedication and enthusiasm for the project as a whole...so in September, with the knowledge that he had some previous mediumship experience and interest in trance, I offered him the opportunity of sitting within the cabinet himself.  In fact he was offered six supported sittings, sitting with me once weekly.  We agreed that after this time we'd review our experiences and make a decision as to whether to continue with our experimentation or not.


Here I offer a brief resume of these initial sittings which took place with just myself in attendance as witness:


1: The gentleman appeared relaxed while sitting in red lighting conditions within the open cabinet.  The sitting lasted for just over an hour and at close of séance he took a while to return to his normal state of consciousness.


2: The gentleman again appeared relaxed within the same sitting conditions as previously.  Early in the séance I became psychically aware of a number of spirit visitors around him and asked for the gentleman's primary guide and gatekeeper to take control of the sitting.  During the séance the gentleman felt some spirit-control and experienced spontaneous movement of his head.  On this occasion the gentleman returned to consciousness with ease.


3: The sitting conditions were the same as previously.  During the séance both the gentleman and myself became aware of a particular (recognised) spirit presence, which was confirmed later between us.


There was also some strong physical energy seen within the cabinet during the séance…in the form of sparkly lights and 'fog' around the gentleman’s facial features.  The phenomena looked rather as if he was wearing an faintly illuminated stocking face mask...or was overlaid with web.


4: The sitting was held in the now-familiar conditions.  Again physical energy was seen within the cabinet area, of the form previously described.  The gentleman returned to conscious state shortly before the closing of the sitting, so we sat quietly for the full time period (just over an hour).

5: Again the sitting conditions were set as previously.  Energy was again seen within the cabinet area and periodically the gentleman’s face became unseen within the ‘sparkly webby fog’.  On several occasions I felt convinced that a particular face was becoming shown within the blur…and this persons identity was confirmed by the gentleman afterwards.  *I did not tell him who I’d seen until he told me that he had felt this person’s presence three times during the sitting.

6:  This sitting began as usual and with the 'sparkly webby fog' phenomena developing to become seen clearly after a couple of minutes.  Half-way through the sitting I felt spiritually guided to reduce the brightness of the red lighting, and a few minutes after this was able to see that the 'SWF' was indeed luminescent and consequently more clearly seen in dimmed lighting conditions.  I watched the changing lighting affects for some time before the luminous mass appeared to pulsate and form into a column...which was sufficiently dense as to completely obscure my view of the medium.  The luminous mass at this time appeared as a pulsating 'electrical' mass, having 3D affect within.  The complexity of this visual presentation was thrilling! 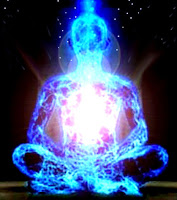 Note: This photo (found on the internet) goes some way to illustrating what was seen in the séance room on this occasion.  The illumination seen was less bright than shown here, but the web-like structure was apparent.
Immediately after the sitting (which was the sixth, as had been agreed) the gentleman and I discussed all that we had experienced and felt during the sittings.  Suffice to say that both of us felt keenly interested to continue.  Therefore, the gentleman and I have agreed to continue to sit together with developmental intent on a dedicated weekly basis.

Onwards:
Regular sittings continued...and then on December 11th, for the first time, a second sitter was invited to join us.  This lady had only sat in three seances previously, with two different mediums, and did not know what to expect on this occasion.  In fact she clearly saw the luminous webs of light around the mediums head and torso.  She also saw a build up of  "dense fog" which totally obscured the mediums head periodically during the séance.  Development continues.
Return to the Lodge
Home
Subscribe to: Posts (Atom)